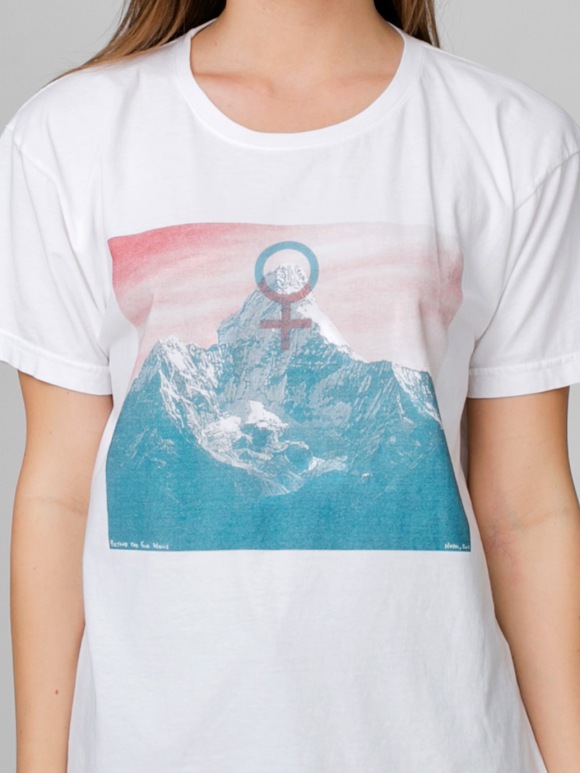 I am astonished by what Wolf Price is doing in Nepal – after visiting (7 times in 7 Years) and teaching in this tiny, poor, and gorgeous country squeezed between China and India he decided to help the girls of this country get free with education, scholarships and computers. He has used his own money to do this and recently forged an alliance with American Apparel of the USA. Wolf and AA designed a beautiful t-shirt and 100% of the profit from the sales goes to girls in Nepal who are eager for education and will not be being forced into servitude or marriage having babies at 13 years of age. See Wolf’s movie  he made about the girls in Nepal here.

Kindly read Wolf’s letter here encouraging our generosity and kindness for the girls:

Dear Friends,
I first comprehended mortality at five. Overwhelmed, I sat down on a rolled up rug and cried. At first I was sad my parents would die, then I imagined the disabled and disadvantaged people of the world- my sympathy for that group outweighed the pain of mortality for my parents and myself- As I sat there in extreme turmoil, I vowed to alleviate as much suffering as possible in my lifetime and stood up in triumph with new found energy to do something significant for humanity in my lifetime-  That was 20 years ago.
I’m proud to announce I’ve finally created something that can bring widespread social impact to the world. After 12 months of intensive development I have reached the most critical stage in my life’s goal mentioned above. The Beyond the Four Walls Endowment Fund- to rapidly bring life changing education to 1000’s of gifted teen women in Nepal whose burning ambition is for educational and humanitarian revolution. “Within The Four Walls” documentary has partnered with an Executive Producer: Rainstorm Entertainment, based in Beverly Hills.Beyond the Four Walls officially launched 2 weeks ago American Apparel Shirt 100%proceeds to Beyond The Four Walls endowment fund
My end goal is to grant $20,000,000 (1 million t-shirts sales) to the most talented and at risk women in Nepal, to demonstrate the global force they can represent if educated.

The next 3 months are unique and critical. I have to seek public support one last time for administrative and other development costs. Now is the time to have the highest possible impact from a charitable investment.

B4W is designed to be sustainable, measure impact, operate on low overhead, and transfer management to top participants within 3 years.

Please take a 10 minutes to help create a miracle this holiday season- at the end of 2012 or in the infancy of 2013.
This is the last time I’ll need to ask for personal tax deductible donations. I’m working carefully with veteran grant writers and philanthropists to be eligible for a multimillion dollar grants
for my 3 year global budget in 3-6 months.

Aside from direct contributions, thanks to our fundraising partnership with the American Apparel,
if we sell 1,500 Beyond the Four Walls shirts the 3 month start up budget will be covered. ($30k).

Watch this message from Prathi 2010– 18 years old, who was married and pregnant with her second child less than 2 years after this message was recorded.
This project is entirely dedicated to her and the millions of literate young women like her in developing world with no money for education being silenced from arranged marriage every year.Robert E. Levin, the award winning innovator and author of the best selling 1st biography of Bill Clinton, has become my executive advisor to accelerate talented and disadvantaged girls in Nepal.

“I believe that the rights of women and girls is the unfinished business of the 21st century”
“We see women and girls across the world who are oppressed and violated and demeaned and degraded and denied so much of what they are entitled to as our fellow human beings.”
-Hillary Clinton

I’m asking for your help to help to strategically spread the word during the final days of 2012. 2013 is going to be a successful year but we are still in a stage where $500 (minimum tax deductible amount) will make a significant long term impact.If you want this cause to be successful, consider forwarding this message or compose your own version. Otherwise the easiest way to help is to buy the official shirt of the movement- 100% of proceeds will be used for educating girls in Nepal. 2012 was the year of Malala Yousafzai, and therefore the perfect year to contribute to empowering literate young women in developing countries and breathe life into her generations rapidly disappearing relevance once married. The world will be a better place if we help this historic generation of women- the first to be educated in their families.
Official SHIRT: http://store.americanapparel.net/product/?productId=2011spf
Donation Page: http://www.beyondthefourwalls.org/p/donate.html
New 2min intro video: http://youtu.be/pf9Xe4HdxAY
new web site: http://www.beyondthefourwalls.org

The time of the most marriages is January/February, I am determined to be in Nepal by January, to start sponsoring as much education as possible (with t-shirt funds) to rapidly strengthen my proof and infrastructure for major grants and high profile partnerships in 2013 and beyond.

Thank you- attention and action from this message is monumental for the cause.

Attached is an image of the shirt and a letter from Sarada, the original B4W student, who I’ve personally sponsored fee’s for computer school since March 2012.
Happy Holidays and conclusion to an amazing 2012.